Taped by
Joe D'Amico ''AKA'' Joebeacon

Transferred by
Joe D'Amico ''AKA'' Joebeacon

Reviewer: stealthhippy - favorite - November 6, 2008
Subject: no trick NO TREAT!
came in NYC psyched for Phil, got Phil as Jerry ,forgetting words, coming in late, and the show had zero energy except the very beginning and end.......don't bother..next day and following great but bad trip for the hippy this night!!!!!BOOOOOOOOOOOOOOO

Reviewer: happy420 - favoritefavoritefavoritefavoritefavorite - November 5, 2008
Subject: Jambase gave this a terrible review!
You can hear it for yourself, but I have to entirely disagree with the reviewer from Jambase, Mr. Bravosa. Were we at the same show? The band is 10 times tighter than they were a year ago. With respect to the sound being "muddy" all night, I question Mr. Bravosa's understanding of acoustics and concert sound in general.

If you stood on the floor all night, you were not only in front of the sweet spot from the mains, but mostly hearing the (unmixed) stage sound passing through and around all the other bodies around you. If you stood on the level where the tapers were (where you could stand directly in front of the soundboard), it sounded like a million bucks. Ditto for much of the seats behind that, as they had repeater speakers in the ceiling piping crystal clear sound into your ears. Every venue will have it's unique acoustic qualities where the sound is best in certain places. You can usually count on it sounding best from near the soundboard. Finally, all the sound-checks prior to the first set are to an empty room, so the first set in front of an audience requires some adjustment on the mixing engineer's part. This is a guitar heavy line-up, so at times they can seem to all blend together.

The crowd was indeed young. I think older heads most likely would rather not hang with a rowdy and overly "medicated" crowd in Times Square of all places on Halloween of all nights! I saw more than one person pass out in the crowd, and quite a few people who had taken too much of one thing or another losing control. Jackie appeared to have done his own make-up, looking like a long lost little brother of KISS.

Now to the set. I made it in late and missed most of "the Golden Road". Good tune though and nice tempo for opening energy. The recording has the audience singing along enthusiastically and some really nice solos from Larry and Barry. Tight outro!

The jam into "Cream Puff War" was interesting and a nice opportunity for Larry and Barry to warm up. Steve brought some nice watery textures to the transition to "Cream Puff War" itself which was another welcome classic, this tune lends itself to Steve's limitted vocal range. The psychadelic groove kept the heads bopping and grooving while each of the guitar players took a turn riffing. Steve Molitz' organ work anchored the tune to it's 60's roots. The jam was not as extensive as some I've heard, as if to make room for everything else to come.

Jackie's "Cold Black Devil" had a vibe of "ok, we're finally here after all the anticipation", as the band relaxed into a slightly slower tempo for the first time in the set. It's got a funky, spooky, groove, and Jackie's vocals shine. Very nice guitar work by all three hands again, with Larry showing of his impecable slide work. The jam was killer, with John Molo bringing great dynamics to the whole tune.

From the jam, a short China-Cat tease tickled the crowd's fancy, but served merely as a transition to "It Must Have Been The Roses". I for one love this tune, and everyone around me was enthralled and many singing along to every word. If there were long lines at the bathroom and bar during this tune, I think that says more about the audience than the band! With Larry playing beautiful fiddle, sweet pedal steel flourishes from Barry, and Jackie's gentlemanly reading, this was a nice soft spot in an otherwise very high energy show. I happen to like the fact that Phil puts songs where you would never expect the Grateful Dead to have done. I also like how with the differing instrumentation they sound much more country than the classic GD did.

"Next Time You See Me" was another rocker, and the P&F reading of this tune is a very classic boogie-woogie. I half expected Jake & Elwood Blues to appear. Jackie Blues would have to suffice though, and he didn't dissapoint. Jackie's harp solo would have made Jake Blues smile for sure! Steve Molitz' versatility shined on this tune as well, sounding like a classic honky tonker. Larry and Barry traded sweet licks while the rest of the band vamped it up toward the end. It was the star of the set for me, and I note that this tune was NOT EVEN MENTIONED in Mr. Bravosa's review above. The crowd was definitely into it and singing along to every chorus.

"Mason's Children" is another gem from the classic GD era. The group singing on this tune was a bit rough, but it wouldn't be Grateful Dead music if it sounded like N'SYNC! Really good playing by everyone though, and another short but dynamic jam in the middle gave Barry some time to shred. After the closing verse and chorus, the band flowed into a nice dark jam, constructing and deconstructing the groove before slipping seamlessly into a straight-forward but acceptible "Casey Jones", with the crowd again singing along to every chorus.

The opening weirdness of the second set was not as well executed this year as last, namely because Phil's mic was muffled and quiet. You couldn't understand whatever spookiness he was reading, but it seamed deliberate...it was nothing if not psychadelic, but it didn't really get interesting until the end.

"Boris the Spider" was a raucus lift-off though, and a good indication of things to come. It was a perfect prelude to "Frankenstein", the only bust-out of the night. Phil's bass playing was thick and juicy, but Steve Molitz' synthesizer really made this tune. Molo's heavy hitting and the wicked slide-guitar/pedal steel work really made for an fat jam tinged with southern guitar-rock harmony parts.

The welcome opening notes of "Cryptical Envelopment" indicated we'd reached the meat of the show, Phil's bass leading the way, but just when you thought "the Other One" was around the corner, Jackie grabbed an acoustic guitar and they threw "Down In The Valley Woe" at us. Larry's dobro work really shined on this tune as he traded licks with Barry and comp'd Jackie's vocals.

I'm constanly impressed with this band's ability to jam from one tune to the next regardless of key or tempo. The segue into "the Other One" was interesting and perfectly executed. Once there though, it took a while for the energy to really build. Partly due to the fact that Larry was still playing dobro, much of the tune was quiet and down tempo.

I think "What's Become of the Baby" was really a treat, considering that the Grateful Dead never performed it, and it lent itself to the spooky theme of the night. It served to fill the spot that Space would have held in a Grateful Dead second set nicely. But I understand folks not familiar with the tune might have felt it was a snoozer. The star was Theresa Williams though, her vocal a beautiful counterpoint to Phil's dry baratone.

The reprise of "Cryptical Envelopment" led into a tasty little jam with all three guitarists making nice contributions and building on one another's parts, but the real treat was "St. Stephen". At the sound of the opening notes the crowd was PUMPED! There were some really nice harmony guitar moments between Barry & Larry in each jam. The second jam was a great build, but Phil broke a bit early, so Molo rounded everyone back up for a second pass, and they jumped into the last verse. Everyone was singing along and blissed out by the end. "What WOULD be the answer to the answer man?"

Imediately the first strains of "Gimme Shelter" then began to ring out, the whole crowd greeting it with cheers. Jackie gave a bluesy reading, with Theresa Williams doing a great job of channeling the female vocals on the Stones' original version. Once again great guitar playing from all three. This was a great outro for the second set. Finally, the anticipated "Werewolves Of London" encore finished off the show on a fun note. I think it was played much better this year than last. So glad Barry Sless was part of this show! He kicked much ass on this night.

Anyway, the only thing that really sucked about this show was coming out of the front of the venue to a gauntlet of NYPD surveying the heads as they came out. Anyone who looked obviously intoxicated was thrown into the paddy wagon. Next thing I know 20 cops are chasing some guy down the street. It was pandamonium!

Reviewer: lovemusic87 - favoritefavoritefavoritefavoritefavorite - November 3, 2008
Subject: What a show!
Show was awesome this recording is excellent, thank you. Had be guesing the whole night, teased so many songs. Got spooky in the second set during Phils poem and Whats become of the Baby?. The Cold Black Devil was high energy, had the crowd moving. Casey Jones was a lot of fun, aswell as my costume for the night. Frankenstein blew my mind, completely twisted it to a point its never been, To me it seemed like they were able to tie Slipknot into the entire jam. Fun Fun Fun in NYC! 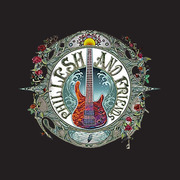 Uploaded by ekoostikal on November 3, 2008